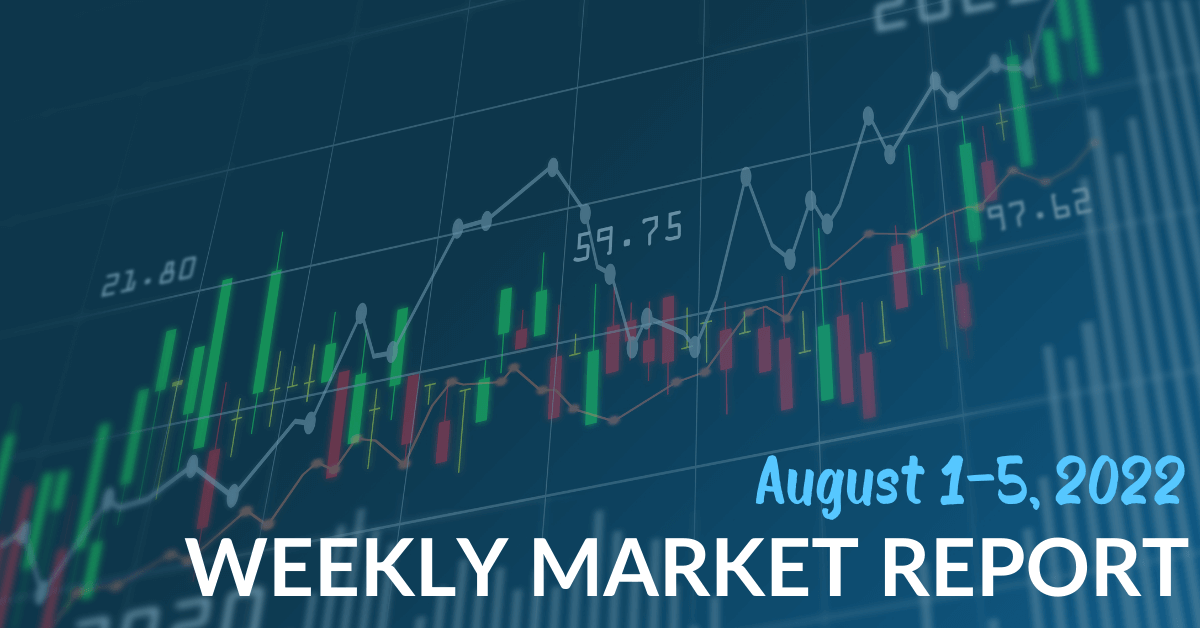 But the big news this week is two things we’re looking at for inflation. One is the jobs report—528,000 jobs in July. That was double what was expected. Plus, the unemployment rate went down to 3.5%, which was significant because we haven’t seen a number like this since 1969. And while these numbers are strong and show that different industries are doing well, defying expectations for a slowdown in job creation, wage growth rose a little bit more than expected. It was up 0.5% from the prior month and, for the year, up 5.2%, suggesting that inflation is still around and not really going away, particularly in the service sector.

This is not what the Fed officials have been looking for. So, while strength in the labor market is good news for the economy, it is bad news for the market. And here’s why. The Fed said last week in their July statement that for them to get less hawkish, meaning stop raising rates at this pace, they’re going to need to see the labor market become less tight, which means rising unemployment needs to get to four percent or higher. We’re at three and a half right now, so we want it to go the other way, meaning falling jobs. We want to see the jobs number, not at 528,000 but below 300,000. So, that jobs report we just received means more rate hikes are needed to cool down this tight labor market and ease inflation, which again is the big problem.

So in reaction to this data, the stock market fell on Friday. Bond yields rose slightly, as expectations for the Fed to keep cranking rates higher is now embedded in the market. The bond market now expects another rate hike of 75 basis points in September. It was looking for about 50 basis points last week. But as a result of this, 75 is now the odds-on favorite. And we’re seeing a peak of the Fed funds rate now in March of 2023 at 3.6%.

So next week, the big one is going to be the looming CPI report. The Consumer Price Index report again will show inflation in a big way or not such a big way. And so that’s going to be a very important number to let us know what the Fed is thinking and what they’re going to be doing. Are they getting inflation under control, or do they have to keep cranking rates higher, which is not good for the market and not good for tech stocks in particular?

We’ve seen a good summer rally right now based on the expectation of the Fed pivoting, coming off the brakes, and this data we just got from the job market should disrupt that market from being calm. So, more gains could be more difficult to achieve in the stock market as it’s going to take time for inflation to come down and for the Fed to signal that they’re going to stop raising rates. Between now and September, Fed officials are going to have another employment report, and they’re going to have two more inflation readings to look at—again, CPI is one of them. Then, they’ll start doing their projections and talking about their path of rate hikes for the future. The uptrend in jobless claims, along with the recent downtick in job openings, suggests that the exceptional strength of jobs is going to be hard to maintain, so we’ll see what happens.

Now, what happened this week in Europe? I want to contrast the U.S. market versus the European market, especially if you invest internationally. What we had happen this week was the Bank of England raised rates. They followed the European Bank and hiked rates by 50 basis points. This was the biggest single hike they’ve done since the mid-nineties, and they warned of a near-term recession and cautioned that inflation could hit 13% by year-end. Their governor, Bailey, said he expected a recession in the fourth quarter in the UK and that it would be a long recession, and he felt that inflation will get to 13% before it starts to decline. So, the takeaway from his discussion on what’s going on in the UK is the surging cost of energy in Europe right now is the number one factor that’s going to drive the EU and the UK into a recession. This surge is a result of the Russian-Ukraine situation, as the cost of gas supplies to Europe has increased, resulting in reduced economic output. They literally won’t have the power, like electricity, for the economy to run at full speed. That’s it, period.

Overall, the economic outlook for both regions right now is not particularly great over the coming quarters. So if you’re in there, I’d suggest you hang on. But if you’re a longer-term investor and thinking about opportunities, that might be a place to take a look at, and this is in contrast to the U.S. I want to compare and contrast that because yes, the US economy is slowing down. I’ve been talking about that for a while now, but there is zero concern here in the U.S. about energy because we have the power to power the economy. It’s definitely a different situation. Don’t link the two together, particularly if you hear that commentary somewhere else, because it’s a different market.

Now, let’s talk about oil. There are a lot of pieces moving around the world this week in oil and energy. OPEC said that global demand is slowing down. Obviously, there’s been a wave of disappointing economic data coming from around the globe. The demand trend right now is showing a sharp drop in consumption, which suggests that the excess capacity won’t be needed for the quarters to come unless there is another unforeseen supply side shock. Bottom line, right now, demand concerns are now the dominant influence on the global energy market. And those supply worries are going to persist with the Russia and Ukraine war going on in Europe and so forth, as we just talked about. We’re going to need to see evidence of demand coming back for the oil market to begin to find a bottom.

On the charts right now, the next level of support to keep your eye on is 89.25. And from there we go to 87.29 and from there 84.91, so still 80s is what we’re thinking. And 95 on the upside would be the resistance level we need to go through to see any sort of meaningful move to the upside. Next week, again, it’s all about the CPI on Wednesday, so that’s the big news we’re going to be looking at to get a view of inflation and see what’s going on there.