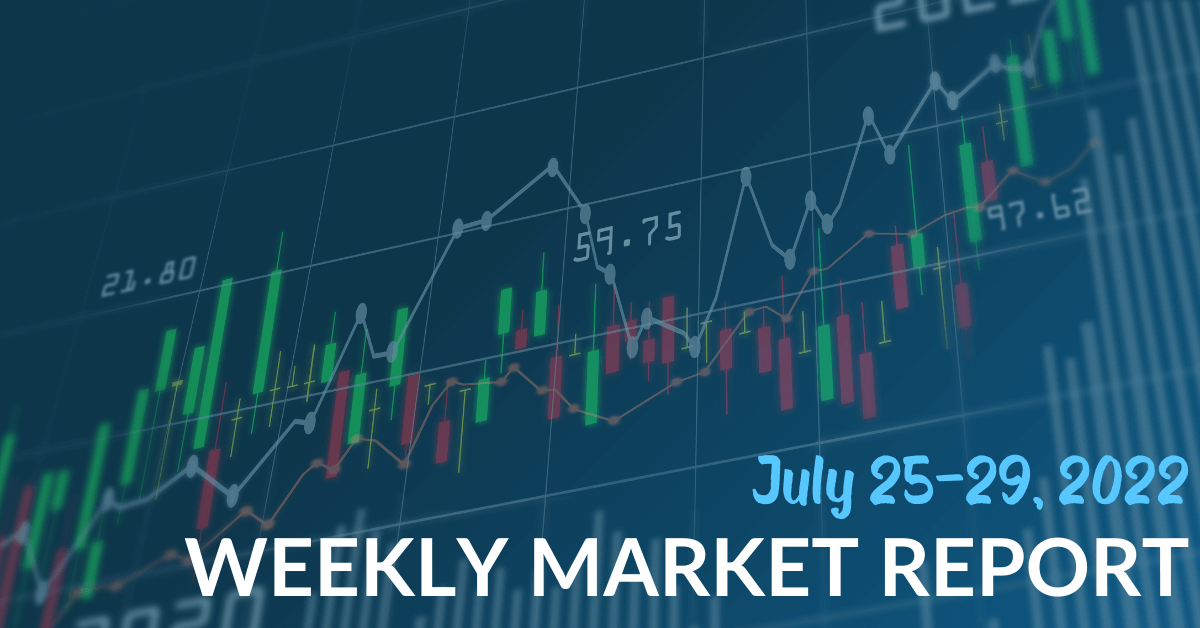 Why did markets rally to multi-week highs on the hope that inflation would peak soon, hopefully in August, and that, in turn, would lead the Fed potentially to get less hawkish sooner than previously expected? There was nothing in Wednesday’s statement when Chairman Powell spoke. There is really no reason for stocks to reverse the gains of the past few weeks. And they didn’t because they had already priced this in.

On the other hand, there was nothing in the statement or press conference to validate the idea that inflation is peaking in the near term and that it could lead to the Fed getting less hawkish sooner than later. So, I’m a little skeptical of the acceleration we saw at the end of this last week, but why don’t we take a look at his statement specifically? The Powell press conference and the rally was driven by Powell’s statement that at some point in the future, the Fed would reduce the amount of rate increases. Now, as you know, they raised interest rates 75 basis points to around 2.25 to 2.50 as you look at the numbers. That was expected.

But beyond the immediate reaction, which was the market moving higher, the Fed decision had two important and concrete takeaways for the markets. First, August 10th—put that on your calendar. We’re going to get what’s called the CPI, Consumer Price Index Report. Now, what I’m going to say is very important. The second thing we took away from the statement was the jobs report is now center stage. So, starting with the CPI, markets have priced in a peak in the year-over-year headline CPI this August. And if that peak doesn’t come to reality, then this market, I think, is vulnerable to a pullback that could be, say, 10%. Now, regarding the jobs report, the Fed made it clear that a strong labor market is offsetting the potentially slowing economy. And that matters because what they’re saying is that as long as the labor market remains this tight, they can’t get less hawkish, even if economic data starts to roll over from here. So, that makes the August 5th jobs report more important than it previously was because if the labor market begins to soften, then it will slightly open the door to the Fed becoming less aggressive. And that increases the chances that the Fed would ultimately achieve what they’re after so diligently, a soft landing, which is pretty tough.

If the Fed gets less hawkish, what are we looking for? Well, unemployment getting higher. So right now, as you know, it’s below 4%. So one takeaway is, from what we’ve seen this past week, that consumer spending is slowing down. It’s losing momentum. The bright spot, though, last week, which didn’t catapult the market further lower was business spending and investments in business remain pretty strong. And that’s important because it’s going to help minimize the pain from any material economic slowdown that we see. We generally ignore the headline reading of the durable goods, as it’s often skewed more toward airplane orders. I look at what’s called new orders for nondefense capital goods ex-aircraft or NDCGXA, which gives us the best, pure look at business spending and investment in my opinion. And that number not only saw gains in June but also beat expectations, rising a half a percent versus the estimates of 0.2 percent. So, that index has been consistently solid all year long. And again, that’s important because economic growth comes from three sources: government spending, consumer spending, and business spending. And for a material slowdown and material economic contraction or a recession to occur, all three of those have to be declining. If business spending can hold on, which right now is the only one that is, that increases the chances that the slowdown that we’re in right now is going to be modest, and that would be an overall positive for stocks longer term. So going forward, the impact of these rate hikes is going to become a big headwind on the economy. We’ll have to keep watching the business index closely for signs that business spending is starting to slow down because that would be an incremental economic negative and increase the chances of a bigger recession.

Now, the three key takeaways that I walked away from this week was that the U.S. economy is slowing, and this is evidenced by the GDP data, the Fed commentary, and the earnings results that we’ve seen. Second, the Fed may now start to hike rates at a much more gradual pace. And third, markets did a lot of work to the downside ahead of the slowing economic conditions and earnings data. And that’s why this week it wasn’t too bad when they raised rates 75 basis points.

Now, let’s talk a little bit about the GDP growth because technically—as I’ve been saying for a while, I’ve been calling a recession. This is the first time it’s actually been published. This was the first week I heard in any sort of press that technically the U.S. has hit a recession. So, the GDP reading came in at -0.9% quarter over quarter annualized below the consensus estimate of +0.8 reading. So, this was the second quarter in a row of a negative GDP reading in the U.S., which is largely considered a technical definition of a recession. If we compare that with the first quarter, the second quarter figure clearly showed signs of slowing. Consumption slowed to a pace of 1%, down from 1.8. And residential investment, which we all feel right now fell sharply, down 14%, compared with a gain of 0.4% growth in the first quarter.

Second, the earnings from the S&P 500 have softened. Overall, we’re now about halfway through earnings season, with 55% of the S&P 500 companies having reported already. Of these, 72% have reported an upside surprise to earnings, and estimates for the full-year forecast continue to remain resilient, calling for about a 9% growth year over year. But nonetheless, like the GDP report, earnings for last quarter may not yet reflect the impact of the higher interest rates ahead by the Federal Reserve. So, I expect forecasts to continue to be revised lower, especially for 2023, because we’re already starting to see estimates for next year’s earnings move lower, now down close to 8.4% year over year from just about 10% expected at the end of last quarter. We’re already starting to see that settling happening.

What does it mean for you and your money? Well, first of all, on the S&P 500, we got pretty close to the 4100-price target I called last week. That just happened. So, the resistance level right now is 4018. And if we can hold above that for a week or so, 4147 and then 4286 would be the next on the upside. What about the downside? Well, the next support level is 3903. So, if we go through 3903, we’re looking at 3818. If we drop below 3818, you’re looking at 3728. Right now, neutral on stocks hasn’t changed since last week. We’re still equally balanced between growth and value 50-50. And next week, we’re going to be looking at the earnings release and the unemployment number.