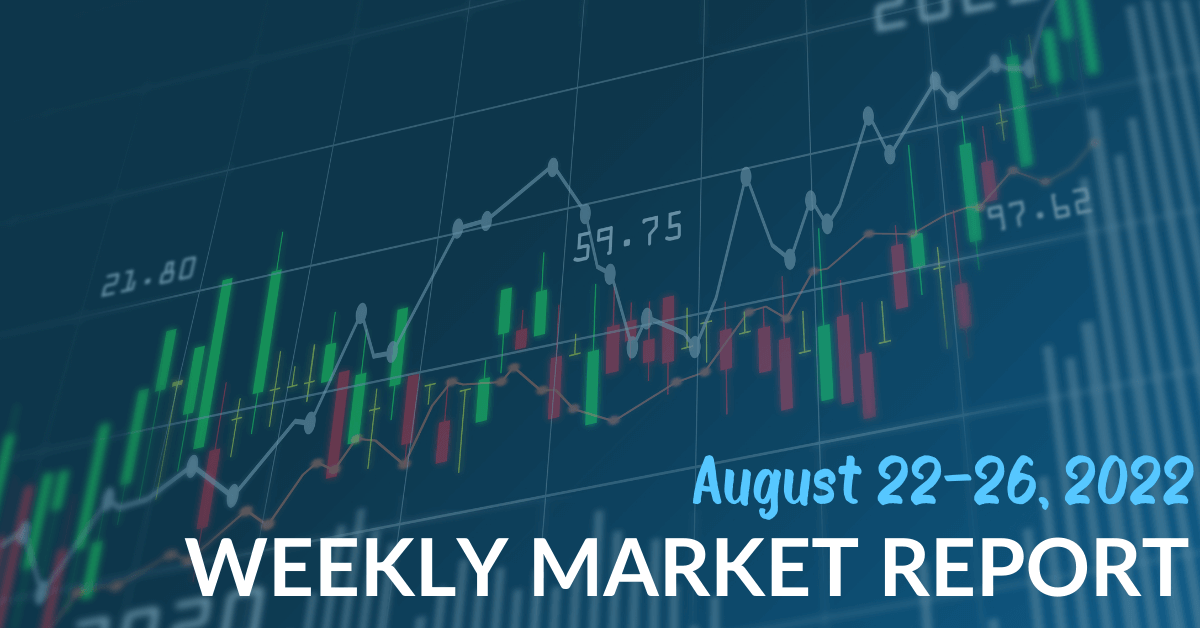 Tough Week for the Markets

It was a tough week for the market. Clearly, the economic news is not controlling the market—the Fed is. The market for the week finished down 4.2% on the Dow. The S&P 500 was down 4%. The NASDAQ was off 4.4%—back in correction territory, over 22.4% down for the year. The ten-year yield at 302 was flat for the week. And bonds are down 9.7% year to date. Oil closed at 92.92 a barrel. So, what happened? Friday, Chairman Powell spoke in Jackson Hole about inflation and how the Fed’s policy isn’t exactly what the market thought it would be, and the market didn’t like that. You saw exactly what happened on Friday, which wasn’t good. And because inflation and growth right now appear to be rolling over the pace and the easing of the rising rates isn’t as slow as what the market was hoping for. Clearly, Chairman Powell didn’t provide any clues about whether they’re going to raise rates 50 or 75 basis points next month. That’s not surprising since Fed officials have stated they don’t intend to let us know what they’re going to do. They’re going to look at the data and then make decisions. That’s why we’ve got to pay attention to the upcoming August employment number we’ll see next Friday and any sort of inflation numbers that keep coming out next week because that could determine what they end up doing in mid-September.

People have been asking me what’s changed. A key reason why the rebound in stocks has basically stalled is that the market has walked back expectations for what the rate cuts are going to look like through the end of ’23. We’re out over a year now. So, the front loading that was going on with the rate hikes is removing pressure from the Fed to act, but we all know rates are going to rise. And Chairman Powell said that they’re not going to prematurely change their policy, so I think a likely scenario is the Fed Fund rates are going to peak around 3.75%, maybe 4%. We’ll probably see that in the next six months, and that’s because as inflation starts to calm and rollover, which we’re starting to see right now, the Fed can start to back off a little bit. That’s what I expect to happen.

Why is the economic data not driving the market right now? That’s important because this is the first time that’s happened. These reports come out, and the market doesn’t really do anything. But then when the Fed says something, all of a sudden, wow, we have these big moves. Why is that? Let’s look at a couple of things that happened last week. You have something called the Producers Manufacturing Index. It basically measures production. The August PMI came out last week, and 45 was the number. It was quite a bit lower than the estimate of 49.2. Remember, anything below 50 is a contraction, so 45 is surprising. You would think that’s bad news, and it would affect the market, right? Well, it didn’t it didn’t at all because the market’s saying, that’s not really a bad number. In other words, without inflation there, the Fed’s more likely to ease. This was the first case in point where it showed that the economic data is not being reflected in the stock market.

Next, we had the second data point this week in the economy since the pandemic, which had to do with the bad-is-good scenario when it came to overall weakness in the travel sector. Let me explain that. I don’t know about you, but I’ve now been traveling around to these weddings. The airports are packed. The planes are packed. Hotels are oversold. There are no rooms. You’re probably saying, “What do you mean?” Well, here’s what happened. Part of the number we got this past week had to do with travel and leisure activities. According to the numbers, it’s slowing down hard. And if that’s true, we should expect growth to slow in the next coming months as well. And again, you would think the market would drop on that news this past week, but it didn’t. So again, this is a second area where we’re seeing things happen that just don’t make a lot of sense.

Bull Market Rally—Still Going or Over?

Now, is the bull market rally over? Good question. I don’t think the recent pullback we saw in stocks that just started is actually a bad development from a technical standpoint—graphs, charting, that sort of thing. Let me talk about that. The simple reason why I’m saying that is the broader stock market does not move in a straight line; it bounces all over the place. The market ebbs and flows like a river. We need to set new highs or new lows to actually build what we call a base. So, the previous resistance levels that we’ve been talking about are now developing what’s called a support once the market moves beyond them, and this is healthy. I view this recent pullback in equities as a step in an overall process for the market to attempt to put in a bottom.

Now, I’m trying to be clear here. My view is not that the market has bottomed for good or that we’re headed for new all-time highs. But I think the S&P 500’s ability to snap back in late June, trend sideways for about a month, and then start to rally was the first positive we’ve seen to forming what I’ll call a tradable bottom. Right now, my outlook overall remains neutral because I still need to see the market establish what I’ll say is a new bottom and then move to a new high beyond the month-to-date peak, which we just saw at 4300. And right now, I’m seeing the bottom at 4000, 4050 is what we just saw, or 3900. These are predictions based on graphs. That could be the particular bottom that we’re trying to form right now. To get there, we have to see peak inflation, peak hawkishness. We have to see China fully reopen, and we have to see more resolution to this Russia-Ukraine war. It’s also important to consider that for the longer term this new bottom takes to form, the more formidable, the more support, the more faith I’ll have in confirming that we’ve ultimately bottomed.